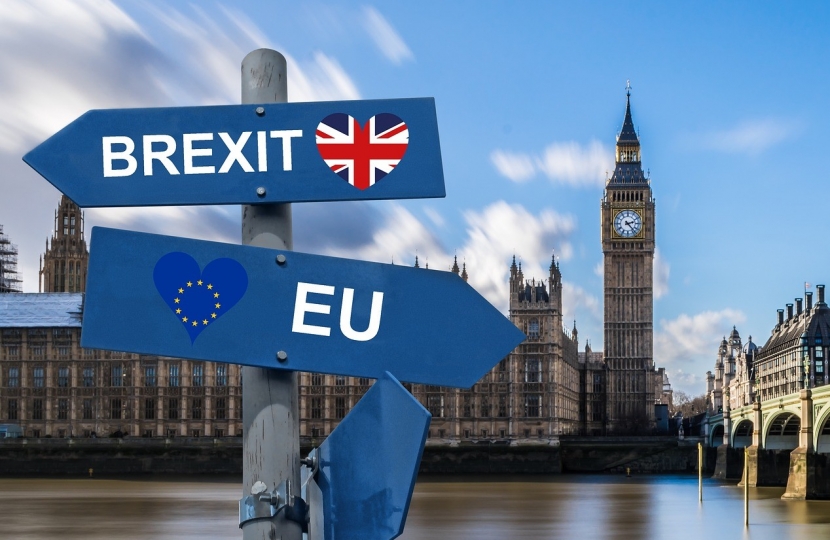 Jonathan voted for the UK to leave the EU back in 2016, in the belief that with control of our own borders, the ability to forge new trade deals with global partners, and the freedom to legislate free from Brussels, Britain can look forward to a prosperous future.

In September 2020, Jonathan provided the following statement on the UK Internal Market Bill:

Thank you for contacting me about the UK Internal Market Bill and the UK’s respect for international law.

There has been much speculation about the Government’s commitment to treaty obligations and international law.  I believe that some of the commentary has misrepresented the situation.  It goes without saying that my ministerial and MP colleagues and I are committed to the rule of law as determined by a democratically elected Parliament.

The UK Internal Market Bill is fundamentally about protecting the integrity of the United Kingdom.  The Prime Minister made this clear when he introduced the Bill in the House of Commons.  The Bill will support the provision of more powers for all parts of the UK and ensure that businesses can continue to trade seamlessly across the UK – just as they have done for hundreds of years.  As we recover from the coronavirus pandemic, it will also help to protect jobs and support our economic recovery.

With regard to the provisions on the Northern Ireland Protocol, you should know that the Protocol contains inconsistencies that the UK and EU had intended to resolve by the end of the year.  The end of the Transition Period is fast approaching, and with no agreement yet reached, the Government has proposed a safety net to protect the Union and ensure that the UK’s obligations under the Belfast Agreement are met.  We must deliver on our promises to the people of Northern Ireland and this Bill allows us to do so.

If no action were taken, the default legal position would risk creating barriers to trade within the UK and could threaten the Union.  The EU, for instance, has already suggested blocking the transport of food from Great Britain to Northern Ireland.  The Government’s proposals make clear this cannot be allowed to happen.

Please find attached the following items which expand on the purposes of the UK Internal Market Bill and help explain why the Government is taking the stance that it is:

I particularly recommend the Daniel Hannan article as it gives a pretty good summary of my views on these matters.

Thank you again for writing to me about these important matters.  Please be assured that I will be considering my parliamentary votes very carefully indeed over the coming days and weeks.  I am particularly keen to learn more about the proposed amendment from Sir Bob Neill MP as I know he is working assiduously with MP colleagues and with the Government to get the wording of the Bill right and potentially put in a parliamentary lock.

In an earlier statement during the summer of 2020, Jonathan provided the following update to his constituents:

The UK left the EU on 31st January. A transition period has followed during which market access remains the same and the UK and EU are negotiating an agreement on their future relationship. The manifesto I stood on was clear that the transition period would not be extended beyond December 2020 and this has been put into law.

I appreciate that some constituents may have concerns about the upcoming deadline, but Ministers have already shown that they are able to negotiate international agreements with speed and efficiency.

Negotiations have been continuing throughout the coronavirus outbreak. I understand that significant progress has been made across a number of areas and the technical detail is well understood by both sides.

The UK and the EU share closely aligned interests and I am confident that the determination and willingness of the parties to reach a free trade agreement will ensure that the matter is brought to a conclusion by the end of 2020 as legally committed to in good faith by both parties as part of the Withdrawal Agreement and Political Declaration on the Future Partnership.

Jonathan submits parliamentary question about Brexit to the Treasury

Treasury has provided the following answer to Jonathan's parliamentary question (185033):

Question:
To ask the Chancellor of the Exchequer, what recent steps he has taken to ensure the preparedness of HMRC for the UK leaving the EU. (185033)

To ask the Secretary of State for International Trade, what the timetable is for the publication of the tariff schedule for the possibility of a no-deal scenario.

The Government has released details of legislation to take back control of our agricultural policy from the EU.

Click the below link for more details of the Agriculture Bill envisaged to deliver on a Green Brexit.

The Government have released a presentation which offers a detailed update on the future UK-EU relationship.

Here is a copy of the Chequers Statement issued by HM Governement: