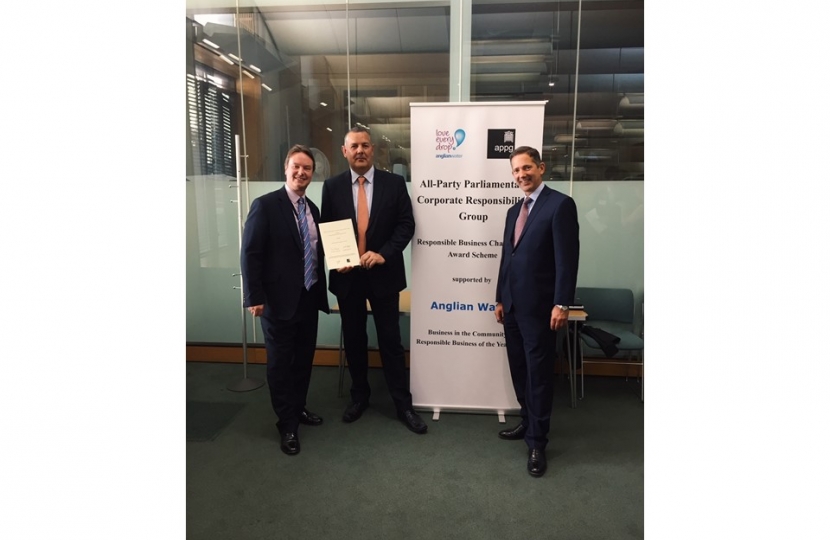 Each year MPs are invited by the All-Party Parliamentary Corporate Responsibility Group (APCRG) to identify an outstanding local business which, because of its positive impact in their constituency, deserves to be nominated. A parliamentary judging panel then considers the companies nominated by MPs against national criteria announced each year by the APCRG, selecting one company as the winner of the APCRG National Responsible Business Champion award.

The criteria assessed by the parliamentary judging panel in selecting the 2019 National Responsible Business Champion are as follows:

On the 16th July 2019, Invotra’s CEO, Fintan Galvin, attended the awards ceremony for all nominees. The event took place at Portcullis House at the Houses of Commons in London.

Co-chair of the APCRG, Baroness Greengross opened the awards ceremony, followed by Jonathan Djanogly MP, who referred to the short-listed companies, commended the top 3 companies and announced the winner. Although Invotra missed out on the top prize, they were highly commended by the judging panel, being recognised as joint 4th.

Kelly Tolhurst MP, Parliamentary Under-Secretary of State at the Department for Business, Energy and Industrial Strategy, then presented the award and spoke about the importance of responsibility in business.

Jonathan and Invotra congratulate all the organisations that were shortlisted, but in particular, Standard Life who came 1st overall.

Invotra already have an award-winning track record for hiring, training and promoting apprentices. They have had tremendous growth as a business over the past few years, but they have done so whilst maintaining the highest standards of corporate and social responsibility. It was a real pleasure to nominate Invotra for the Responsible Business Champion of the Year award, thus allowing their ethos and achievements to be assessed and recognised at a national level.