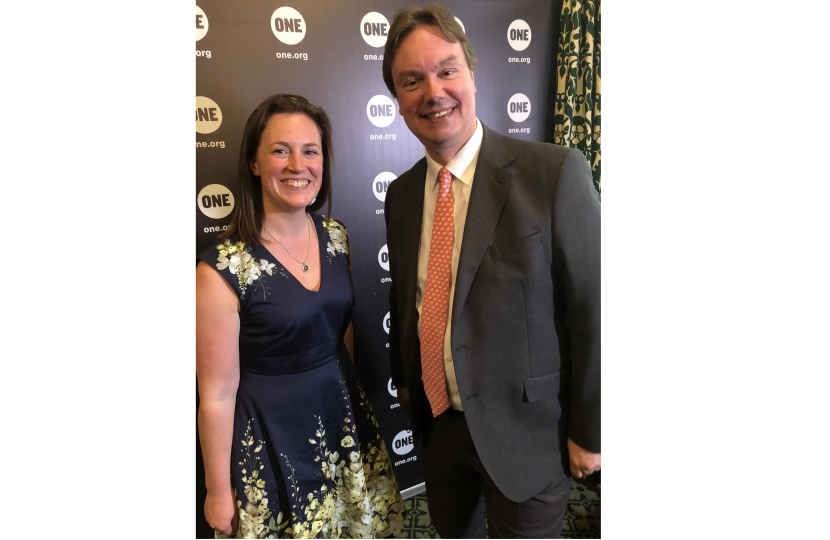 A local health worker, who volunteered in a rural hospital in Ethiopia travelled to Parliament to deliver a message about the importance of the international fight against killer diseases.

Dr Alexa Vardy, from West Byfleet, spoke at the ‘Health Heroes’ event organized by anti-poverty campaign group the ONE campaign in Parliament, where she addressed MPs and fellow campaigners about her work supporting people living in the world’s poorest countries.

Dr Vardy said: “It was an honour to speak in Parliament about the importance of health for people who have less than us, and how important it is that the UK continues to take a leading role.

At the event Dr. Vardy spoke about her work as an obstetrician and gynaecologist who volunteered for a year at a hospital in Tigray, northern Ethiopia. The hospital she worked at had a high rate of neonatal mortality, and serves around 400,000 people, with some patients walking 30 miles to receive treatment.

Dr Vardy continued “I really believe in the importance of helping anybody who doesn’t have access to essential health care, wherever they are in the world.”

During her time at the hospital, Dr Vardy trained midwives and staff, helping to ensure safer deliveries for thousands of mothers and babies. The skills and experience she brought to the project helped build sustainable health systems and safer deliveries in the region to protect mothers and their children. As a result of her work, and that of other doctors working across the region, the number of babies dying in the first 28 days of their lives reduced by 40%.

Speaking at the event, Woking MP Jonathan Lord said: “It is a pleasure to introduce Dr. Vardy, who during her time volunteering in Ethiopia helped lower the rate of cesareans, encouraged safer techniques and mentored staff.”

International Development Minister Baroness Sugg said: “These fantastic healthcare heroes are delivering aid where it is most needed, saving lives and helping poorer countries prosper - whether that is responding to humanitarian crises, natural disasters or tackling deadly diseases.

“We should be proud of the great work people like Dr Vardy are doing, using their British expertise to help those in need around the world.”

As well as the work of the Health Heroes, the event promoted the Global Fund to Fight AIDS, TB and Malaria, which will have its replenishment conference later this year.

The UK is a key supporter of the Global Fund, and the money it has pledged to date has helped saved 2.3 million lives.

If the Fund is fully financed by the UK and other donors, it will save 16 million lives over the coming years in the world’s poorest countries from these killer diseases.

Romilly Greenhill, UK Director of The ONE Campaign, said: “It was inspirational to hear about the work that Dr Vardy does helping people around the world – she is a true Health Hero.

“I hope that the Government and Politicians take note of how important this issue is, not just for the speakers at this event, but for the millions of people across the UK who are proud of our work to support those overseas”.

Earlier this week Jonathan led a debate in Parliament on the issue of M25 noise pollution in Surrey.