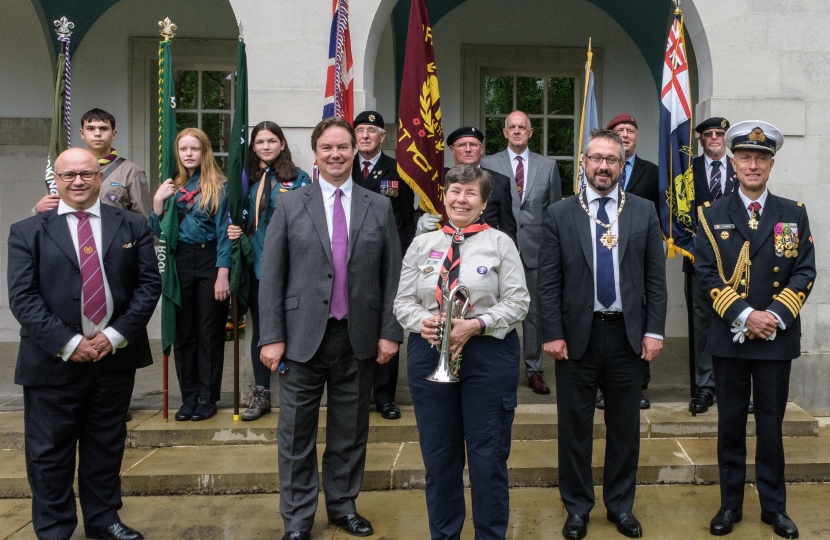 On Sunday 4th July 2021, Jonathan Lord MP attended a colourful and very moving Last Post Ceremony at Brookwood Military Cemetery to commemorate the 80th Anniversary of these ceremonies taking place in Brookwood.   Please find below an account of this important event shared with Jonathan by Cllr Kevin Davis who has organised many Last Post ceremonies over recent years.

In January 1941, the first ceremony was held in Brookwood, temporarily substituting for the stopped Last Post ceremony under the Menin Gate in occupied Ypres.

The Gordon’s School Pipes and Drums led a parade which initiated proceedings shortly after three o’clock.

For our Individual Remembrance, we chose a total of eight people. One each from the founding countries of the Commonwealth War Graves Commission (then know as the Imperial War Graves Commission), Australia, Canada, India, New Zealand, South Africa and the United Kingdom. One from the United States as there are many members of the American forces buried in Brookwood Military Cemetery as well as being commemorated on the Menin Gate, and finally, a Belgian Special Operations Executive officer celebrating the unique link between Ypres and Brookwood.

From the UK, we remembered Ensign Vera Leigh, Women’s Transport Service, First Aid Nursing Yeomanry (FANY); Special Operations Executive. She worked as a courier for a clandestine SOE circuit in Paris, but was arrested in October 1943. After interrogation by the Gestapo in Paris, she was kept in prisons in France and Germany before, on 6th July 1944, she was sent to Natzweiler concentration camp and executed by lethal injection. Her body was cremated and her ashes scattered at an unrecorded location, she is therefore remembered on Brookwood’s Memorial to the Missing 1939-45, panel 26, column 3. Ensign Leigh was awarded the King’s Commendation for Brave Conduct.

From Canada, we remembered Cpl James Hendry, GC, 1 Tunnelling Coy, Royal Canadian Engineers. In the Second World War Hendry served with No.1 Tunnelling Company of the Corps of Royal Canadian Engineers who had been given the task of digging the tunnel between Loch Spey and Loch Laggan to supply water to the British Aluminium works at Fort William in Scotland. When a fire broke out in an explosives store near Loch Laggan, Hendry ordered his colleagues to run to safety and attempted to extinguish the blaze rather than attempt to escape the inevitable explosion. The huge blast also killed his colleague Sapper John MacDougall Stewart, and seven more were injured. Hendry was subsequently awarded the highest possible award for his courage, the George Cross. He is buried in block 31, row F, grave 9.

From India, we remembered Sepoy Jan Muhammad, 16th Punjab Regt., Indian Army. Little is known of Sepoy Muhammad, other than that he is believed to have been at Lynwood Chase, Bracknell where he died of natural causes or by accident on 14th August 1941. He was 37 years old. Sepoy Muhammad was originally buried in the Muslim Burial Ground, now the Peace Garden, in Horsell, near Woking, before being relocated in 1968 to Brookwood Military Cemetery, where he is buried in block 2A, row D, grave 6. His name is listed at the Peace Garden.

From Australia, we remembered Wing Commander Basil Howard DFC, Commanding Officer of 456 Squadron RAAF. Basil Howard was the son of Albert and Diana Etty Howard of Seven Hills, New South Wales. He had been on active operations since late 1941, had twice received a Mention in Despatches and also the Distinguished Flying Cross and at a young age had been promoted to Wing Commander and command of a squadron. Shortly after the cessation of hostilities in Europe, on 29th May 1945, Wing Commander Howard was returning to his base on the Essex coast when he lost one, and then the other, engine of his Mosquito aircraft. The aircraft dived into the sea and Howard was killed. Wing Commander Howard is buried in block 4, row K, grave 22.

From New Zealand, we remembered Flight Sgt William Radcliffe Lewis RNZAF, 180 Squadron, RAF. On 25th August 1944, Lewis was on the 30th and final sortie of his operational tour. As the pilot of a B-25 Mitchell medium bomber, he took off from his base of Dunsfold, to bomb a petrol and oil lubricant dump in northern France. The aircraft was hit and damaged by flak en-route to the target, the port engine was disabled and the bomb doors were jammed stuck. Turning back towards England, the aircraft steadily lost altitude as the crew were unable to jettison the bombs to lighten the weight of the aircraft, which hit the sea hard, some 12 miles from Beachy Head. One of the four-man crew was instantly killed, Bill Lewis and one other survived the impact, but were seriously injured and died while awaiting rescue. Only the Navigator/Bomb Aimer, Flying Officer Hodder, survived, he was in the water for three hours before being picked up by a search and rescue aircraft. Flight Sergeant William Lewis, Royal New Zealand Air Force, is buried in block 8, row AA, grave 8.

From South Africa, we remembered Private Thomas Knowles, 1st Regiment South African Infantry, South African Army. Private Thomas Andrew Knowles is the youngest burial in Brookwood Military Cemetery. He was the son of W. Knowles of Kimberley, South Africa. He came to Britain with his unit, but died on 22nd October 1918, shortly before the Armistice of 11th November 1918 which marked the end of the First World War. It is believed he died as a result of the Spanish influenza panic that was starting to sweep the world. Private Knowles was just 15 years old when he died. Given the length of time that his training and shipping to Britain would have taken, it is likely that he joined up at the age of 14, possibly 13, by misrepresenting his age. He is buried in block VII, row A, grave 8.

From the US, we remembered Private First Class Clifton M Jordan. He was a member of the 16th Inf Regiment, 1st Division. He was born 13 Nov 1892 in Arkansas but he enlisted from Montana. He went missing in Action on 4 July 1918 in Cantigny France. The battle around Cantigny was the first combat engagement of the AEF. He is commemorated on the wall of the missing of the Somme American Cemetery. For his courage under fire he was awarded the Distinguished Service Cross.

From Belgium, we remembered Sergeant René Michaux. Volunterring for the Belgian Section (T Section) of SOE, he trained in Cranleigh, Surrey. He was one of four agents to be dropped into occupied Belgium on the night of 7/8 January 1944. The flight was undertaken by a Halifax aircraft of 138 Squadron from RAF Tempsford in Bedfordshire. The aircraft developed an engine problem and the operational drop of the agents could not be made. On its return to England, the port-outer engine would not feather and with his aircraft still heavily laden, Pilot Officer Kennedy could not keep control and the Halifax flew into Tetworth Hill on the final approach to the runway at RAF Tempsford. Only the British agent survived with slight injuries – the three Belgian agents and six RAF crew were killed as the Halifax crashed and burst into flames. Sgt Michaux was just 21 years old. The three Belgian agents were initially buried in Bedford cemetery. The bodies of two were subsequently repatriated to Belgium after the war, but that of Sgt Michaux – with no immediate family in Belgium – remained buried in Britain and was relocated to Brookwood. He is buried in the Belgian plot, plot 26, immediately adjacent to the RAF memorial, in row D, grave 13.

John Gillespie Magee was an Anglo-American aviator and poet. Magee served in the 412 Squadron, Royal Canadian Air Force, which he joined before the United States entered the war; he died in a mid-air collision over Lincolnshire on 11th December 1941, flying from RCAF Digby. He is buried in a Commonwealth War Graves Commission plot at Scopwick Church Burial Ground in Lincolnshire. He was just 19 years old when killed.

Afterwards invited guests and members of the Brookwood Last Post had refreshments at the Trench Experience.

Jonathan has seen his Private Member's Bill successfully pass through the House, by which he campaigned for the naturalisation rights of Foreign and Commonwealth soldiers in our Armed Forces. Following agreement by both Houses on the text of the Bill, it received Royal Assent on 13th March 2014.