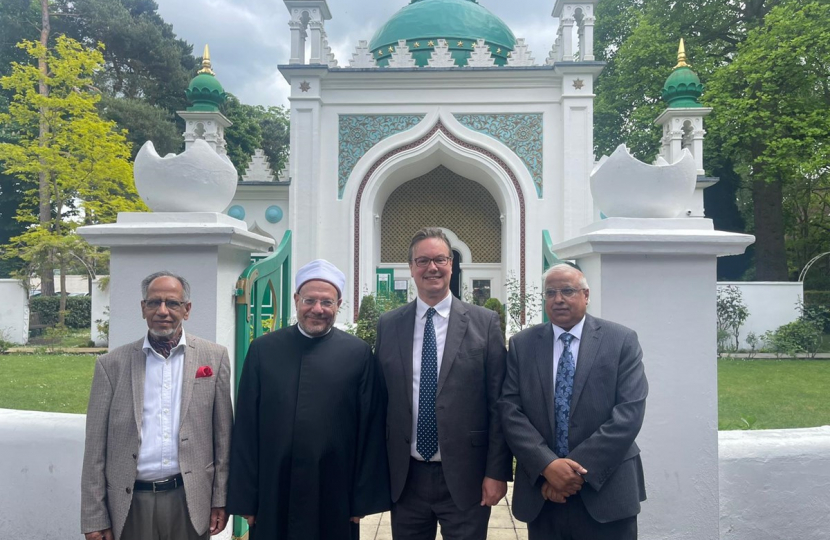 His Eminence Dr Shawki Allam, Grand Mufti of Egypt and leading scholar and Islamic religious authority, began his recent week long visit to the United Kingdom by visiting the historic Shah Jahan Mosque on Monday with Jonathan Lord MP, Co-Chairman of the All-Party Parliamentary Group (APPG) on Egypt and local Member of Parliament for Woking.

After visiting the Mosque and meeting with Head Iman Imam Hafiz Hashmi, His Eminence travelled to Westminster to address MPs, Peers, and other dignitaries. In attendance was a cross-party selection of Parliamentarians including the Prime Minister's Special Envoy for Freedom of Religion or Belief Fiona Bruce MP, former APPG Co-Chairman the Rt Hon. Stephen Timms MP, former Special Envoy Rehman Chishti MP, and current APPG Co-Chairman the Rt. Hon Lord (Mark) Marlesford. Also in attendance was Egyptian Ambassador to the United Kingdom, His Excellency Sherif Kamel.

Speaking towards the end of the visit, Jonathan commented:

I’m pleased to say that the Grand Mufti of Egypt had a very successful visit to the U.K. this past week and that he impressed U.K. Parliamentarians in his special address in Parliament with his moderate and thoughtful key messages encouraging peace and harmony and interfaith dialogue in all countries of the world.