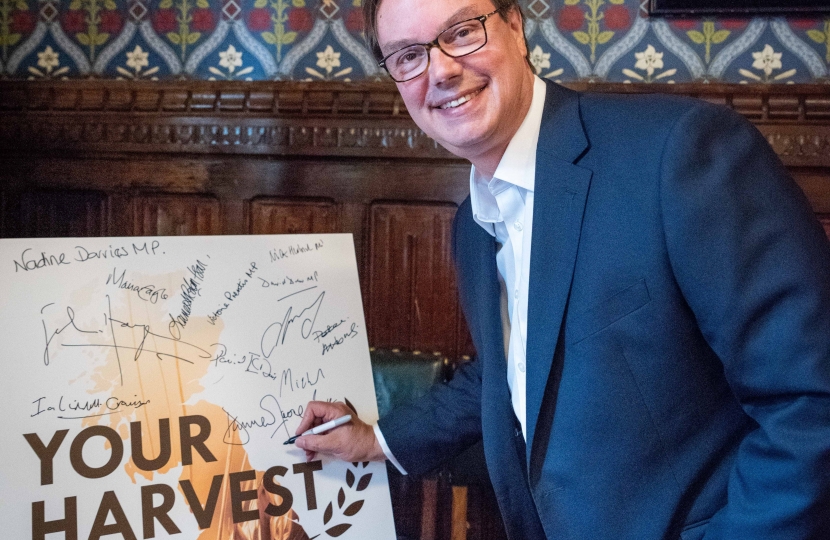 Jonathan has pledged to support the UK’s arable sector by raising the profile of its contribution to the nation’s economy, food supply, and environment.

At the #YourHarvest parliamentary event led by the National Farmers’ Union, Jonathan committed to visiting farmers in their constituency and working with them to champion the work farmers do in producing quality, safe and affordable food alongside maintaining and enhancing the environment.

The arable sector feeds into all areas of food and drink and plays an important role in the animal feed manufacturing sectors, contributing to:

Jonathan: “A thriving arable sector is in the interest of all my constituents and every single person that eats British food. It is important that we fully appreciate how much the sector provides for the nation and I fully support this new initiative by the NFU.

“I am committed to working with the NFU to help deliver a Brexit that compliments the practicalities of food production, and allows the sector to flourish.”

Tom Bradshaw, Chair of the NFU’s National Crops Board said: “The UK arable sector has a brilliant story to tell and never has there been a more important time to tell it.

“That is why the NFU launched its #YourHarvest campaign – to work with MPs to deliver for a sector that is so important to food production and delivering environmental outcomes.”

The Prime Minister today set out her plans for a post-Brexit farming policy which works for farmers and food producers while improving the environment.