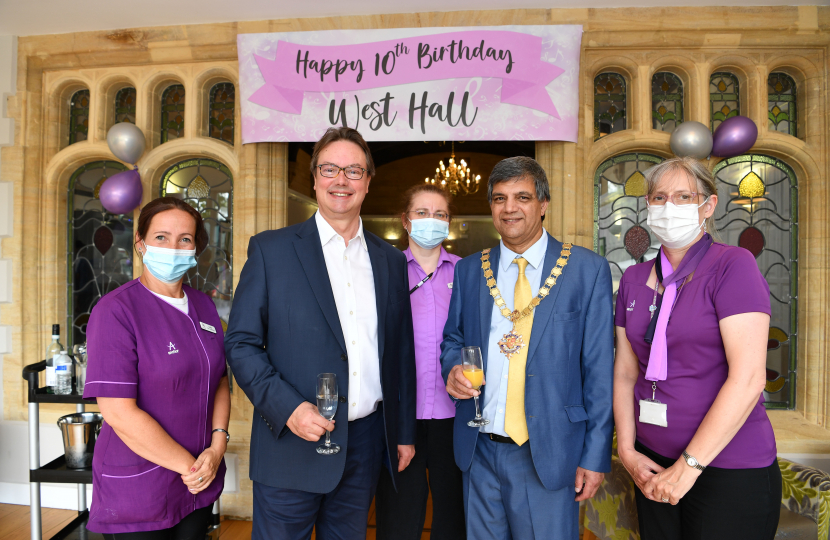 West Hall care home in West Byfleet has celebrated its 10th anniversary with a party for residents and members of the local community.

Anchor’s West Hall care home on Parvis Road was opened on 23rd June in 2012 by Princess Alexandra. On Thursday 23 June, 10 years to the day after opening, the home celebrated with a party for residents and their loved ones. Members of the local community also came to the celebration, including the Mayor of Woking, Saj Hussain and Woking MP Jonathan Lord.

Everyone enjoyed an afternoon Tea in the beautiful five and a half acre grounds. Guests also enjoyed musical entertainment from harp soloist Danielle Clarke and local musical act Charlie and Ronnie.

The highlight of the day was the unearthing of a time capsule buried when Anchor’s West Hall care home was opened. Jonathan Lord MP had the honour of burying the capsule 10 years ago and was delighted to return to see it reopened.

Everyone had a lot of fun going through all the buried memorabilia from 10 years ago. It was especially memorable for 16-year-old apprentice Care Assistant Lily Allen, who was one of the school children that put letters and pictures in the capsule 10 years ago! The capsule was then reburied with some more memorabilia from the present day added.

“I remember when I first moved here in 2019, it just seems like yesterday! I suppose time does go quickly when you’re having fun. Here’s to another 10 years!”

Kat Mahoney, General Manager of Anchor’s West Hall care home, said: “We can’t believe it’s been 10 years since we opened. I’m really proud of the wonderful community we have here. We’ve all worked hard to create a fun, enabling environment for our residents and to give them top quality care. This would not have been possible without everyone on my incredible team working together so well.

“This is the first event we have been able to arrange since I joined West Hall as General Manager.  It was lovely to see the residents and their loved ones enjoying the afternoon. We look forward to having many more in the years to come.”

“It is clear to me that the Prime Minister has lost the confidence of his parliamentary colleagues and therefore must stand down.